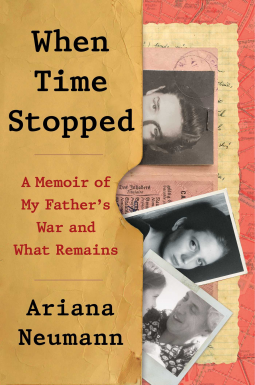 In this remarkably moving memoir Ariana Neumann dives into the secrets of her father’s past: years spent hiding in plain sight in war-torn Berlin, the annihilation of dozens of family members in the Holocaust, and the courageous choice to build anew.

In 1941, the first Neumann family member was taken by the Nazis, arrested in German-occupied Czechoslovakia for bathing in a stretch of river forbidden to Jews. He was transported to Auschwitz. Eighteen days later his prisoner number was entered into the morgue book.

Of thirty-four Neumann family members, twenty-five were murdered by the Nazis. One of the survivors was Hans Neumann, who, to escape the German death net, traveled to Berlin and hid in plain sight under the Gestapo’s eyes. What Hans experienced was so unspeakable that, when he built an industrial empire in Venezuela, he couldn’t bring himself to talk about it. All his daughter Ariana knew was that something terrible had happened.

When Hans died, he left Ariana a small box filled with letters, diary entries, and other memorabilia. Ten years later Ariana finally summoned the courage to have the letters translated, and she began reading. What she discovered launched her on a worldwide search that would deliver indelible portraits of a family loving, finding meaning, and trying to survive amid the worst that can be imagined.

When Time Stopped is an unputdownable detective story and an epic family memoir, spanning nearly ninety years and crossing oceans. Neumann brings each relative to vivid life. In uncovering her father’s story after all these years, she discovers nuance and depth to her own history and liberates poignant and thought-provoking truths about the threads of humanity that connect us all.

Memoirs are always hard to review since you’re not evaluating character development, pacing, etc. So, I’ll focus on the writing and the overall picture Ariana Neumann is painting.

When Time Stopped is Ariana Neumann’s research into her father’s past after finding a box of documents that once belonged to him. After combing through the documents and talking to family members she didn’t know were related to her, When Time Stopped paints the picture of a Jewish family doing everything in their power to save themselves from the atrocities of the Second World War.

I thought When Time Stopped would focus almost solely on Hans Neumann, her father, instead it focuses on his family in general and the bleak picture of Europe leading up to and during World War Two. Sometimes Ariana Neumann paints too broad of a picture and gets lost in the details of names and locations making it difficult to follow at times. I had to refer to the family tree at the beginning of the novel multiple times since the Neumann family is a big one.

At around the halfway mark of the novel, Neumann introduces large passages of a memoir her father had started writing before he passed. These are easily the best parts of the memoir. Hans Neumann’s writing rings as authentic in its details of life during the Second World War and his emotional state. It’s truly inspiring and humbling reading his story from his own words. Had he finished his own memoir, I would I have likened it to Night by Elie Wiesel.

When Time Stopped is an engaging historical account of World War Two as told through the eyes of a Jewish family doing everything possible to survive. Their incredible strength and resilience will stay with me forever. Through the inclusion of photos and documents, the Neumann family history is brought to light.

***I received an ARC from the publisher via Netgalley for an honest review.

Have you read When Time Stopped? What did you think?