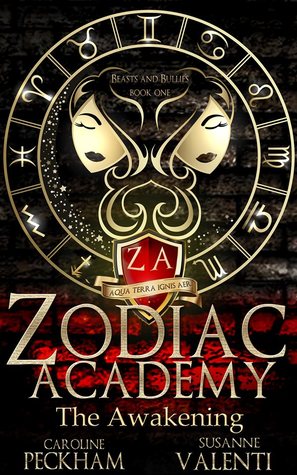 You have been selected to attend Zodiac Academy, where your star sign defines your destiny.

If you’re one of the Fae, elemental magic is in your blood. And apparently it’s in ours. As twins born in the month of Gemini, we’re a rare breed even in this academy of supernatural a-holes.

Changelings were outlawed hundreds of years ago but I guess our birth parents didn’t get the memo. Which means we’re totally unprepared for the ruthless world of Fae.

No one has ever harnessed all four of them, until we arrived. And it hasn’t made us any friends so far.

As the rarest Elementals ever known, we’re already a threat to the four celestial heirs; the popular, vindictive bullies who happen to be some of the hottest guys we’ve ever seen. It doesn’t help that they’re the most dangerous beasts in the Academy. And probably on earth too.

Our fates are intertwined, but they want us gone. They’ve only got until the lunar eclipse to force us out and they’ll stop at nothing to succeed.

We never knew we had a birthright to live up to but now that we do, we intend to claim our throne.

We can’t expect any help from the faculty when it comes to defending ourselves. So if the dragon shifters want some target practice, the werewolves want someone to hunt or the vampiresfancy a snack then we have to be ready. But we’ve been looking after each other for a long time and fighting back is in our blood.

I reluctantly picked up Zodiac Academy: The Awakening after seeing it on BookTok described as an adult Harry Potter. After doing a little research, I discovered it was a bully romance so I lost interest. For whatever reason I decided to pick it up and I’m glad I did. Despite my dislike of bully romances, Zodiac Academy: The Awakening kept me glued to the pages. I couldn’t get enough of the world, characters, and magic system.

Zodiac Academy: The Awakening follows Tory and Darcy as they discover they’re part of a supernatural world able to wield elemental magic. They’re thrust into Zodiac Academy where they’re expected to learn to wield their magic and take their place in this world. Tory and Darcy are twins, however their personalities and magic use couldn’t be more different. Tory is the more adventurous and dangerous twin while Darcy is the opposite.

If you’re not a fan of bully romances, hear me out because I dislike them too. Zodiac Academy: The Awakening uses the bully romance effectively. The antagonists’ actions work to push Tory and Darcy to develop their powers. The power imbalance is difficult to overcome at times, however, as opposed to other bully romances, Tory and Darcy get their comeuppance throughout the novel rather than once at the ending. In my opinion, these small wins total up to more than one big win at the end after pages of abuse.

Zodiac Academy: The Awakening is the closest novel I’ve read that captures the Harry Potter magic. Most of the novel follows Tory and Darcy as they acclimate to their new lives and learn about the ruthless world they now have to adapt to meaning readers simmer is their day-to-day lives.

The final aspect of the novel I’ll touch on is the sexual tension that develops throughout the novel. Tory and Darcy are introduced to the four antagonists: Darius, Caleb, Max, and Seth. It’s apparent from their first interactions that they all share tension, but which of the boys will they end up with? Will it be a reserve harem? Who knows and that’s another aspect I loved about this novel.

Overall, Zodiac Academy: The Awakening is my new obsession. It features strong and independent main characters who are able to hold their own. Every aspect of this novel works together to create a cohesive world, interesting magic system, and delicious tension.

Have you read Zodiac Academy: The Awakening? What did you think?