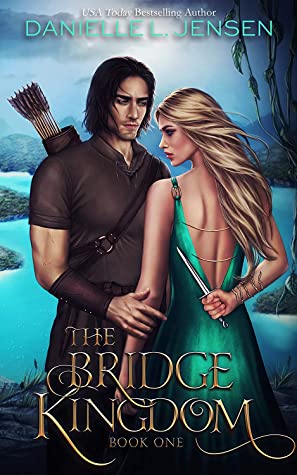 A warrior princess trained in isolation, Lara is driven by two certainties. The first is that King Aren of the Bridge Kingdom is her enemy. And the second is that she’ll be the one to bring him to his knees.

The only route through a storm-ravaged world, the Bridge Kingdom enriches itself and deprives its rivals, including Lara’s homeland. So when she’s sent as a bride under the guise of peace, Lara is prepared to do whatever it takes to fracture its impenetrable defenses. And the defenses of its king.

Yet as she infiltrates her new home and gains a deeper understanding of the war to possess the bridge, Lara begins to question whether she’s the hero or the villain. And as her feelings for Aren transform from frosty hostility to fierce passion, Lara must choose which kingdom she’ll save… and which kingdom she’ll destroy.

I’ve seen The Bridge Kingdom recommended to fans of ACOTAR and FBAA over and over, so I had to pick it up. I have mixed feelings about The Bridge Kingdom. On one hand, I enjoyed the world building and main character. On the other hand, the romance is almost non-existent and turns into instalove.

The Bridge Kingdom follows Lara as she’s given over to the rival kingdom as a bride to ensure peace and free trade. However, Lara has been trained since childhood to infiltrate this new kingdom to learn its defence strategies so that her father can invade.

Lara is an incredibly capable main character. She’s been trained in all manner of fighting, sword, and seduction. She appears to be the perfect princess. Lara carries The Bridge Kingdom. She’s bursting with personality and is full of quick witted responses. Following along with her plans to destroy the kingdom she married into was exciting and easily the best part of the novel.

The king, Aren, is almost a non character. There isn’t anything particularly unique or interesting about him. The Bridge Kingdom is very clearly Lara’s story since what very little readers learn about Aren is quite bland and uninteresting.

Since this has been recommended for fans of ACOTAR and FBAA, I was expecting the romance between Lara and Aren to be all encompassing and fire hot. Unfortunately, they have almost no chemistry. There was one moment at the beginning of the novel that was sexy, but it fizzled into nothing. For almost the entire novel, the interactions between Lara and Aren are predicated on the fact that Lara has a burning hatred for Aren and what his kingdom has done to hers. So, their relationship never feels or develops into something genuine. Since the romance is severely lacking, their profession of love for each other feels like a horrible case of instalove.

Overall, The Bridge Kingdom was a slight disappointment. I was expecting to get a fire hot romance worthy of its book comparisons, however the romance fell flat. Fortunately, the main character and the world building made The Bridge Kingdom worth the read, so I will definitely be continuing with the sequel, The Traitor Queen.

Have you read The Bridge Kingdom? What did you think?