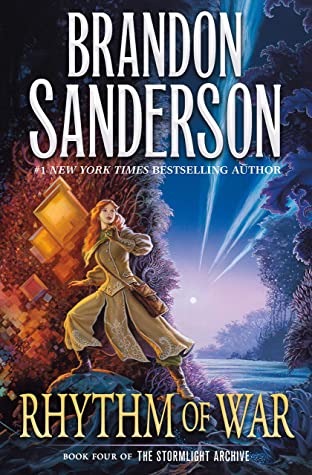 The eagerly awaited sequel to the #1 New York Times bestselling Oathbringer, from an epic fantasy writer at the top of his game.

After forming a coalition of human resistance against the enemy invasion, Dalinar Kholin and his Knights Radiant have spent a year fighting a protracted, brutal war. Neither side has gained an advantage.

Now, as new technological discoveries begin to change the face of the war, the enemy prepares a bold and dangerous operation. The arms race that follows will challenge the very core of the Radiant ideals, and potentially reveal the secrets of the ancient tower that was once the heart of their strength.

At the same time that Kaladin Stormblessed must come to grips with his changing role within the Knights Radiant, his Windrunners face their own problem: As more and more deadly enemy Fused awaken to wage war, no more honorspren are willing to bond with humans to increase the number of Radiants. Adolin and Shallan must lead the coalition’s envoy to the honorspren stronghold of Lasting Integrity and either convince the spren to join the cause against the evil god Odium, or personally face the storm of failure.

Rhythm of War picks up a year later after the events of Oathbringer. Our characters have made progress, though not as much as we would have thought. Kaladin struggles with his depression and PTSD, Shallan has seemingly found a balance between herself, Veil, and Radiant, and Dalinar continues to slowly progress as a Bondsmith.

Sanderson uses part one to catch readers up with what has happened in the last year while thrusting readers into the climax of a mission. This action packed opening sequence is new to the Stormlight novels. I loved this opening sequence. It was exciting and kept me glued to the pages as I looked for every clue possible to give me an idea of what I missed in the past year while also enjoying the mission.

Rhythm of War is a 1200 page novel that doesn’t feel long enough. Sanderson juggles so many characters and plots that it’s truly incredible he was able to write such a successful novel. Rhythm of War hits all the character beats and narrative plot points to perfection.

What I enjoyed most about Rhythm of War was Sanderson’s focus on the mental health of his characters. Sanderson is masterful fantasy writer, but now he can add portraying mental health genuinely to his skillset. His portrayals of depression, PTSD, and dissociative identity disorder are some of the best I’ve read, especially DID. Sanderson doesn’t glorify these disorders nor does he use them as plot devices. His characters have suffered trauma after trauma, so it’s realistic that they have some sort of mental health issue.

Rhythm of War is the most Cosmere of the novels so far. There is a lot of information revealed throughout the novel, but the epigraphs, especially in part two, are ground-breaking for the Cosmere. I’m usually terrible at noticing these hints (I didn’t know about Adonalsium until I heard about it in a podcast), so I was excited to catch what I did catch and I’m even more excited to go through the novel with a fine-tooth comb.

Overall, Rhythm of War is easily the best novel I’ve read this year. It’s full of action, beautiful character moments, and implications for the Cosmere that will change everything.

Have you read Rhythm of War? What did you think?