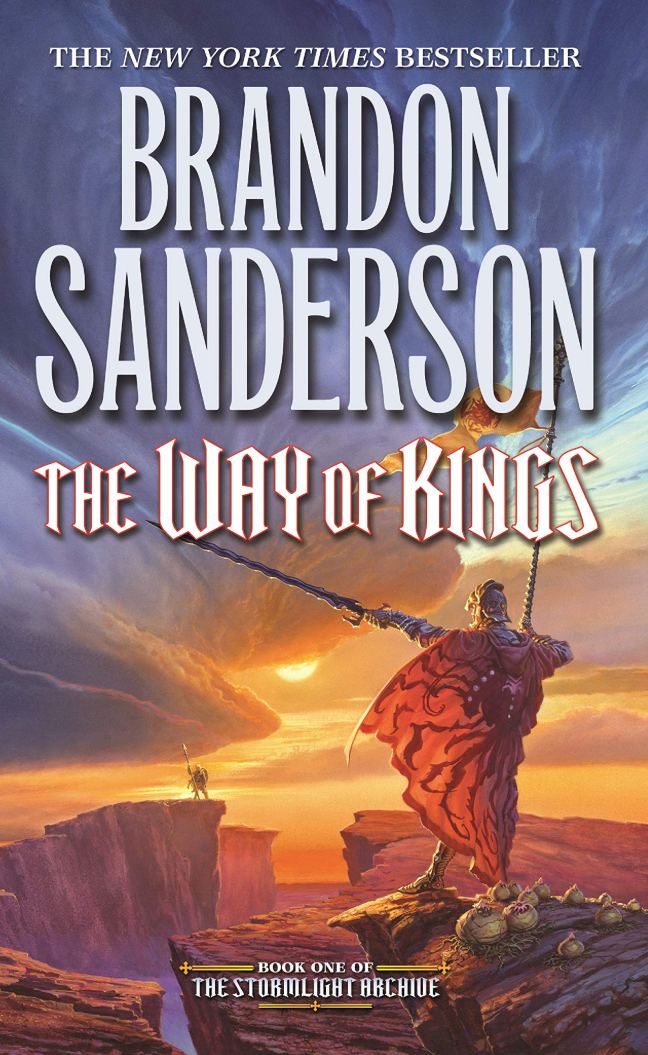 According to mythology mankind used to live in The Tranquiline Halls. Heaven. But then the Voidbringers assaulted and captured heaven, casting out God and men. Men took root on Roshar, the world of storms. And the Voidbringers followed…

Or so the legends say. Today, the only remnants of those supposed battles are the Shardblades, the possession of which makes a man nearly invincible on the battlefield. The entire world is at war with itself – and has been for centuries since the Radiants turned against mankind. Kings strive to win more Shardblades, each secretly wishing to be the one who will finally unite all of mankind under a single throne.

On a world scoured down to the rock by terrifying hurricanes that blow through every few day a young spearman forced into the army of a Shardbearer, led to war against an enemy he doesn’t understand and doesn’t really want to fight.

What happened deep in mankind’s past?

Why did the Radiants turn against mankind, and what happened to the magic they used to wield?

What is there to say about The Way of Kings other than that it’s a masterpiece of fantasy writing? I certainly wouldn’t recommend starting your Sanderson journey with The Stormlight Archive, but once you get here you’ll understand.

This is my first time rereading The Way of Kings and I’m glad I did. I first read it three years ago and have since forgotten a lot of the details. One of the most interesting aspects I noticed during my reread was my reaction to the novel itself. The first time around, I was so invested in Kaladin and the Shattered Plains. I could not get enough of Kaladin and every chapter spent away from him and his journey was time lost. However, this time around I was screaming for more Shallan and Jasnah chapters. There are far to few of them, but they serve the larger plot of the Cosmere. Every line of each of these chapters feels as if they have been written carefully and precisely. To the people who dislike Shallan, why?

Apart from the incredible character development, intricate world building, and the spectacular pacing (did I use enough adjectives?), I think Sanderson’s best accomplishment in The Way of Kings is his foreshadowing. Every revelation and reveal feels earned. If you’re paying attention, none of this should come out of left field.

The Sanderson Avalanche is real, especially at the end of The Way of Kings. Everything is moving along at a fairly quick pace when all of a sudden the plot explodes and readers are racing to the end with not enough pages left in the best possible way. To the people who read this when it was first published in 2010 then had to wait until 2014 for the sequel, hats off to you. You’re the real MVP. I guess I know the feeling now that I’ve waited 3 years for Rhythm of War after Oathbringer.

Overall, The Way of Kings is one of the most incredible opening fantasy novels I’ve ever read. Come to think of it, the only other novel of comparable calibre is A Game of Thrones. Strap in, buckle up, and throw your hands in the air because Sanderson will bring you on the ride of your life with realistic characters and a world so vast and intricate you won’t know your way around.

Sanderson! Ma man! Doing it again and again. I cannot get enough of his writing. His plotting, characters, world building, and dialogue are ALWAYS on point.

The Way of Kings Part One is a phenomenal introduction with multiple characters that are multidimensional and in depth world building.

Kaladin was by far my favourite of the bunch introduced in Part One. He’s inspiring and resourceful with considerable influence despite is lack of awareness of his own qualities. His journey through this first half of the story is emotionally and physically draining and I loved every second of it.
Shallan spoke to me more than any other character. She has endless wit that comes out most often at inappropriate moments. Her thirst for knowledge is unquenchable, which made reading her chapters interesting because the reader learns much about the world.
Danilar and Adolin took me a bit to warm up to. Their chapters were the most confusing at the beginning because of all of the names and relationships to each other. Once I got a handle on who everyone was, I found myself thoroughly enjoying their interactions. I cannot wait to see what happens next with Danilar.
Also, HOID!

Overall, The Way of Kings Part One is great introduction to an impressively massive world with a complicated history. The characters are all or mostly fleshed out with complex personalities and conflicting ideologies. The Way of Kings is best consumed knowing little about the story, hence my vague review.

Have you read The Way of Kings? What did you think?