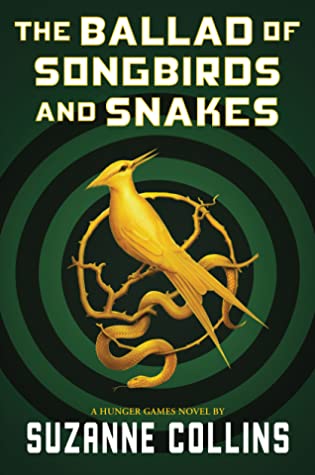 Ambition will fuel him.
Competition will drive him.
But power has its price.

It is the morning of the reaping that will kick off the tenth annual Hunger Games. In the Capitol, eighteen-year-old Coriolanus Snow is preparing for his one shot at glory as a mentor in the Games. The once-mighty house of Snow has fallen on hard times, its fate hanging on the slender chance that Coriolanus will be able to outcharm, outwit, and outmaneuver his fellow students to mentor the winning tribute.

The odds are against him. He’s been given the humiliating assignment of mentoring the female tribute from District 12, the lowest of the low. Their fates are now completely intertwined — every choice Coriolanus makes could lead to favor or failure, triumph or ruin. Inside the arena, it will be a fight to the death. Outside the arena, Coriolanus starts to feel for his doomed tribute . . . and must weigh his need to follow the rules against his desire to survive no matter what it takes.

The Ballad of Songbirds and Snakes is boring. For a 517 page book, nothing really happens. Most of the plot plays out in Snow’s head as he recounts the trauma he still suffers from at the hands of the rebellion. Unfortunately, readers never really feel this suffering in any heartfelt way. Snow is too clinical.

When this novel was first announced, I was slightly disappointed to learn that it was Snow’s origin story, if you will. I came around to the idea interested in learning why Snow is the way he is. Unfortunately, Snow is neither all bad or all good. He stands firmly on the line of good and evil. Sure, you can make the argument that Snow is evil based on the actions he takes throughout this novel, but he always has an explanation that absolves him of blame or guilt since he is most certainly feeling guilt from his actions. By the end of the novel, I was expecting to see a fully evil Snow. Instead, readers are given a character who should by all means feel evil, but just doesn’t. Snow jumps on the bandwagon of opportunities he’s given without really carving out something for himself.

The Ballad of Songbirds and Snakes gives readers a glimpse of what the Hunger Games used to look like before readers see them in the original trilogy. These games are unrefined and a joke. The only interesting thing is comparing the before and after and seeing where the improvements were made.

Overall, The Ballad of Songbirds and Snakes is an incredibly boring villain origin story that lacks drive and villainous actions. Instead, Collins gives readers a long and drawn out story that offers nothing in terms of world building or character development.

Have you read The Ballad of Songbirds and Snakes?

10 thoughts on “The Ballad of Songbirds and Snakes – Suzanne Collins”