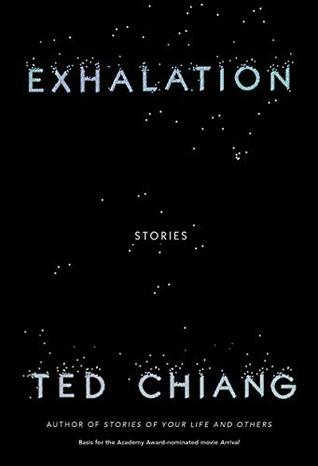 From an award-winning science fiction writer (whose short story “The Story of Your Life” was the basis for the Academy Award-nominated movie Arrival), the long-awaited new collection of stunningly original, humane, and already celebrated short stories

This much-anticipated second collection of stories is signature Ted Chiang, full of revelatory ideas and deeply sympathetic characters. In “The Merchant and the Alchemist’s Gate,” a portal through time forces a fabric seller in ancient Baghdad to grapple with past mistakes and the temptation of second chances. In the epistolary “Exhalation,” an alien scientist makes a shocking discovery with ramifications not just for his own people, but for all of reality. And in “The Lifecycle of Software Objects,” a woman cares for an artificial intelligence over twenty years, elevating a faddish digital pet into what might be a true living being. Also included are two brand-new stories: “Omphalos” and “Anxiety Is the Dizziness of Freedom.”

In this fantastical and elegant collection, Ted Chiang wrestles with the oldest questions on earth—What is the nature of the universe? What does it mean to be human?—and ones that no one else has even imagined. And, each in its own way, the stories prove that complex and thoughtful science fiction can rise to new heights of beauty, meaning, and compassion.

I’ll admit that the only reason I know of Ted Chiang’s writing is because of the movie Arrival. I seen the trailer before the movie was released then immediately picked up Story of your Life. I was blown away by his writing, so I knew I had to pick up Exhalation as soon as I could.

Exhalation is a collection of short stories centered around our relationship with technology. Each story focuses on a different aspect of that relationship and its effects. Memory, relationships, religion, time travel, and more are all explored within a technological setting. Each of these stories made me pause and consider what Chiang was communicating.

I always complain that I dislike short stories since I usually find them lacking. So, if you’re like me then you’ll appreciate Chiang’s work. His writing is beautiful and concise making it a pleasure to read.

Exhalation – 5 stars
Exhalation is one of the stories in this collection I would point to, to demonstrates Chiang’s masterful writing ability. Within a few pages, readers are given a broad sense of the world and character. Chiang explained that his inspiration for Exhalation stems from The Electric Ant by Philip K. Dick and The Emperor’s New Mind by Roger Penrose. The influences are clear as readers experience as the character unearths and recounts his discovery about the truth of his existence.

The Lifecyle of Software Objects follows Ana and Derek as they work at a company that makes Digients. Digients are essentially virtual pets, but they can talk, learn, and grow. Think Neopets, but more interactive. This short story takes a magnifying glass to our relationship with technology, specifically AIs.

It shouldn’t be surprising the aftermath of the creation of the Digients, but I was still shocked. As humans we take and take and take then toss it all away once we’ve exhausted our interest and the item/resource in question. How many Neopets haved wallowed away once the novelty of the website wore off?

Chiang also explores maternal relationships through Ana as she bonds with her Digient and participates in the community that emerged. I would have followed a similar path as Ana in relation to the Digients, so I was able to connect with her and her relationship quickly and easily.

Imagine a world where every single moment of your life was recorded and later viewable. What would change? Less crime? More justice? But what about our relationships with others? Would it change? My initial answer would have been no, but this story shows that the consequences could be incredibly useful and cathartic, but also damaging and hurtful.

The Truth of Fact, The Truth of Feeling also explores our relationship with our own memories and how we think of those memories. Would our personalities change because we now have a full and true account of our life? Would we become more or less truthful? And, finally, how would we fare when confronted with our own fallibility?

Have you read Exhalation? What did you think? What was your favourite story?