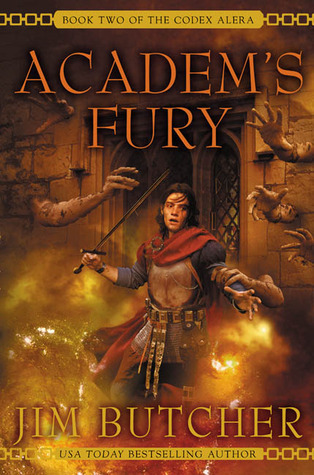 Haven’t read the first book, Furies of Calderon? Check out my review here!

For centuries, the people of Alera have relied on the power of the furies to protect them from outside invaders. But the gravest threat might be closer than they think.

Tavi has escaped the Calderon Valley and the mysterious attack of the Marat on his homeland. But he is far from safe, as trying to keep up the illusion of being a student while secretly training as one of the First Lord’s spies is a dangerous game. And he has not yet learned to use the furies, making him especially vulnerable.

When the attack comes it’s on two fronts. A sudden strike threatens the First Lord’s life and threatens to plunge the land into civil war. While in the Calderon Valley, the threat faced from the Marat is dwarfed by an ancient menace. And Tavi must learn to harness the furies if he has any chance of fighting the greatest threat Alera has ever known . . .

Academ’s Fury is the sequel to the Furies of Calderon though it doesn’t necessarily read like a sequel. Full of action, political intrigue, and characters I will now follow to the ends of the earth, the Codex Alera is a series I’m now committed to 100%.

As I mentioned previously, Academ’s Fury does not read like a sequel for the most part because of the nature of the plot. The novel follows Tavi as he navigates school and training to become a Cursor. With this type of plot comes the typical tropes of attending boarding school. Butcher does a fantastic job of keeping the tropes fresh and exciting through the richness of the characters and plot established previously in the first novel.

Academ’s Fury is action packed and full of political intrigue. Each chapter oscillates between different points of view, primarily Tavi, Amara, and Isana. So, readers get the best of each story unfolding in each perspective. Through Tavi, readers get the typical fantasy boarding school story. Through Amara, readers get a look at the bigger picture. And Through Isana, readers get a glimpse of the political machinations that drive this world.

What I enjoy most about this series is the characters. They’re fleshed out, rich in detail, and full of personality. It’s hard to point to a favorite since they all embody qualities I love to read about in characters, but Kitai and Tavi’s connection is one I’m most excited to explore in the next book, especially with how things end in Academ’s Fury.

Gaius reminds me of Dumbledore. He shows up as an all-powerful character dolling out wisdom and nuggets of important information only to be taken off the board until the end of the novel. I’m excited to see more of him, though I think he’ll suffer a similar fate as Dumbledore.

Overall, Academ’s Fury has cemented my love for this series through its incredible characters and fast-moving plot with twists and turns I didn’t see coming. I cannot wait to get my copy of Cursor’s Fury.

Have you read Academ’s Fury? What did you think?