Haven’t read the previous novels? Check out my reviews for Red Sister and Grey Sister. 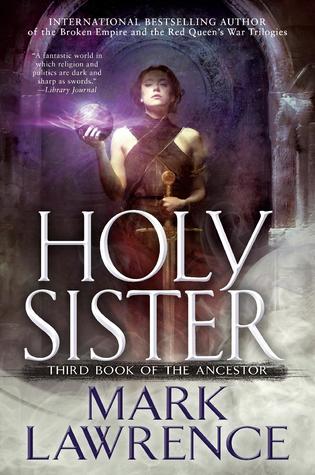 The third installment in a brilliant fantasy series from the international bestselling author of Prince of Thorns.

As a young girl, Nona Grey was saved from the noose by the Abbess of Sweet Mercy. But behind the convent’s walls she learned not a life of prayer and isolation, but one of the blade and the fist. Now she will serve as the convent’s fiercest protector as the emperor moves to destroy the last bastion that stands against him.

Holy Sister is the third and final book in the Book of the Ancestor trilogy and it is truly a work of art. Mark Lawrence concludes the story beautifully by weaving together a complex narrative and giving the characters a worthy ending.

Holy Sister picks up immediately after the events of Grey Sister while alternating chapters that take place three years in the future. I’m usually not a fan of this type of storytelling, but Lawrence’s compelling writing and plotting makes this the only satisfying way to tell the story.

The alternating chapters keeps up an unrelenting pace as the events of the past deeply affects the events of the present, so readers are left to puzzle out what happened to cause the events playing out. The chapters in the past were some of my favorite because I really enjoy Zole as a character. She’s fierce, independent, and mysterious. I’m always wondering what she’s thinking and wanting to witness her badassery over and over.

I expected Holy Sister to pick up in the midst of war and that the war would be the main focus for most of the novel. However, that’s not the case and I couldn’t be happier. Readers still get school shenanigans, though there is a more serious feel to the scenes and have implications for the overarching plot.

Overall, Holy Sister is an amazing conclusion to this trilogy that I would recommend to anyone and everyone. I do admit that I had issues with the first novel, but Grey Sister cemented my love for this trilogy.

Have you read the trilogy? What did you think?