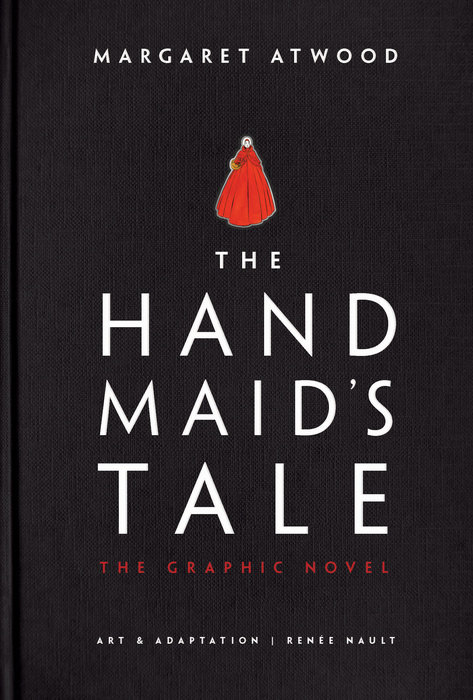 Everything Handmaids wear is red: the colour of blood, which defines us.

Offred is a Handmaid in the Republic of Gilead, where women are prohibited from holding jobs, reading, and forming friendships. She serves in the household of the Commander and his wife, and under the new social order she has only one purpose: once a month, she must lie on her back and pray that the Commander makes her pregnant, because in an age of declining births, Offred and the other Handmaids are valued only if they are fertile. But Offred remembers the years before Gilead, when she was an independent woman who had a job, a family, and a name of her own. Now, her memories and her will to survive are acts of rebellion.

Provocative, startling, prophetic, The Handmaid’s Tale has long been a global phenomenon. With this stunning graphic novel adaptation of Margaret Atwood’s modern classic, beautifully realized by artist Renee Nault, the terrifying reality of Gilead has been brought to vivid life like never before.

The Handmaid’s Tale is one of my favorite classics of all time. I wrote a quick review for it the last time I read it in 2016 in preparation for the television show, so check that out for a more in-depth review. This review will focus on the adaptation of the story for a graphic novel and its illustrations.

My biggest complaint with the adaptation is that it didn’t include my favorite quotes of the novel.

“You can wet the rim of a glass and run your finger around the rim and it will make a sound. This is what I feel like: This sound of glass. I feel like the word shatter.”

There’s something about this quote that gets me every time. It’s visceral in its description and hard hitting in the emotion being conveyed. When I heard about the adaptation, I started imagining how this quote could be interpreted through images. Unfortunately, it wasn’t included. Though, the quote before it about being buttered is included so that kind of makes up for it.

Everything else about the adaptation is executed flawlessly.

The illustrations are gorgeous! I’m usually a fan of more clean cut illustrations, but these have a slight sketch component to them. They fit the story well while also communicating the more subtle moments of the novel.

Overall, everything about this adaptation is incredible. I’d definitely recommend it.

Have you read The Handmaid’s Tale? What did you think? Have you checked out the graphic novel?