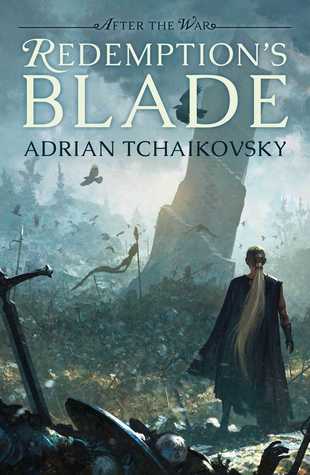 Ten years ago, the renegade demigod known as the Kinslayer returned. His armies of monsters issued from the pits of the earth, spearheaded by his brutal Yorughan soldiers. He won every battle, leaving burnt earth and corruption behind. Thrones toppled and cities fell as he drove all before him. And then he died. A handful of lucky heroes and some traitors amongst his own, and the great Kinslayer was no more.

Celestaine was one such hero and now she has tasked herself to correct the worst excesses of the Kinslayer and bring light back to her torn-up world. With two Yorughan companions she faces fanatics, war criminals and the monsters and minions the Kinslayer left behind as the fragile alliances of the war break down into feuding, greed and mistrust.

The Kinslayer may be gone, but he cast a long shadow she may never truly escape.

Redemption’s Blade follows a band of characters after the epic war has been fought and won. The main character, Celestaine, is on a mission to right the wrongs of the war while wrestling with her own transgressions, guilt, and desires. Redemption’s Blade has a lot of interesting and well-written characters, but Tchaikovsky’s choice to inform the reader of significant world building information in a piecemeal fashion left much to be desired.

Incredibly fascinating and compelling characters surround Celestaine as they travel from location to location on their quest. Two of her companions are ex-soldiers from the Kinslayers’ army. Brutal killing machines now turned good, though their motivations aren’t always what it seems. Tchaikovsky does a fantastic job of crafting character whose motivations and actions aren’t black and white. Their backstories are engrossing and made me want a novella detailing their lives under the Kinslayer.
Unfortunately, Celestaine isn’t as compelling are her companions. She’s built up to be this badass warrior who defeated the Kinslayer, but she falls flat. She’s only ever the woman who defeated the Kinslayer and nothing else.

Tchaikovsky’s world is bleak and desolate after the war. The people of this world are confused, angry, and lost. They do not know how to recover as much has been lost because of the Kinslayer himself and the destruction of the war. Each leg of the quest, the main characters face people who have been left behind by the Kinslayer, religious fanatics, and criminals who are all trying to forge a new path for themselves.

The reason I rated the novel three stars instead of four was because I truly detested the way Tchaikovsky gave the reader world building information in a piecemeal fashion. It left me confused about the world most of the time until it was absolutely necessary that I have the information to understand the scene playing out. This is purely a personal preference of mine, so if you enjoy or do not mind this type of story telling, Redemption’s Blade will be a good fit for you.

Overall, Redemption’s Blade is an interesting enough fantasy story that includes compelling characters and an engaging world, if you have the patience to wait for the information.

** I was provided an ARC from NetGalley for an honest review.

3 thoughts on “Redemption’s Blade: After The War – Adrian Tchaikovsky”