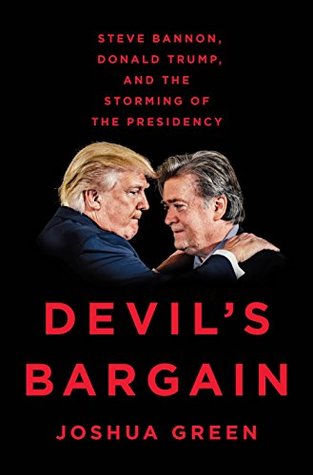 From the reporter who was there at the very beginning comes the revealing inside story of the partnership between Steve Bannon and Donald Trump—the key to understanding the rise of the alt-right, the fall of Hillary Clinton, and the hidden forces that drove the greatest upset in American political history.

Based on dozens of interviews conducted over six years, Green spins the master narrative of the 2016 campaign from its origins in the far fringes of right-wing politics and reality television to its culmination inside Trump’s penthouse on election night.

The shocking elevation of Bannon to head Trump’s flagging presidential campaign on August 17, 2016, hit political Washington like a thunderclap and seemed to signal the meltdown of the Republican Party. Bannon was a bomb-throwing pugilist who’d never run a campaign and was despised by Democrats and Republicans alike.

Yet Bannon’s hard-edged ethno-nationalism and his elaborate, years-long plot to destroy Hillary Clinton paved the way for Trump’s unlikely victory. Trump became the avatar of a dark but powerful worldview that dominated the airwaves and spoke to voters whom others couldn’t see. Trump’s campaign was the final phase of a populist insurgency that had been building up in America for years, and Bannon, its inscrutable mastermind, believed it was the culmination of a hard-right global uprising that would change the world.

Any study of Trump’s rise to the presidency is unavoidably a study of Bannon. Devil’s Bargain is a tour-de-force telling of the remarkable confluence of circumstances that decided the election, many of them orchestrated by Bannon and his allies, who really did plot a vast, right-wing conspiracy to stop Clinton. To understand Trump’s extraordinary rise and Clinton’s fall, you have to weave Trump’s story together with Bannon’s, or else it doesn’t make sense.

I’d like to preface my review by saying that I’m Canadian. Proudly Canadian. So, my opinion about what happened in the American presidential race and vote and about the people involved, ultimately, means nothing. Therefore, my review will focus solely on the delivery of the content rather than not the content itself.

I decided to read Devil’s Bargain after becoming more interested and educated in American politics. American politics are thrilling and full of drama when compared to Canadian politics. I remember reading an article about the opposition bringing cardboard cutouts of Justin Trudeau to parliament to illustrate their point of overspending. Stimulating stuff eh? My knowledge base before reading Devil’s Bargain wasn’t anything extensive. I knew names and events, but nothing too specific.

“To understand Trump’s extraordinary rise, you have to go all the way back and begin with Steve Bannon, or else it doesn’t make sense.”

What Devil’s Bargain does best is lay out everything the reader needs to know about the great manipulator himself, Steve Bannon. If this book does anything, it convinces the reader of Bannon’s genius and everything he did to position himself where he is. This is arguably the best part of the novel. It’s delivered in a mostly clear fashion that links together cohesively. I got a little lost in Bannon’s time in Hollywood and Wall Street, but eventually got the gist of it. What I found most interesting was Bannon’s ties to World of Warcraft and the lessons he learned.

“Yet Bannon was captivated by what he had discovered while trying to build a business: an underworld he hadn’t known existed that was populated by millions of intense young men (most gamers were men) who disappeared for days of even weeks at a time in alternate realities. […] This luciferous insight gave him an early understanding of the size and strength of online communities, along with an appreciation for the powerful currents that run just below the surface of the Internet. He began to wonder if those forces could be harnessed and, if so, how he might exploit them.”

After the rather in-depth look into Bannon’s past, Devil’s Bargain dissolves into a retelling of the campaign trail with few insights into the campaign itself. The focus shifts from Bannon and Trump to the larger picture. The delivery of information in lackluster in his section and had a hard time keeping my attention.

The ending is rushed, but that’s because most of the issues touched upon in the coverage of the campaign are on going.

Did Joshua Green quickly write this novel to cash in on Trump, Bannon, and the storming of the presidency? Perhaps, but am I glad he did? Yes. Devil’s Bargain gives the reader an in-depth look at the people and events leading up the to Trump becoming president in an easily digestible format. However, I would recommend getting to know some of the key players involved a little before reading to get a better understanding of their motivations and actions.

2 thoughts on “Devil’s Bargain: Steve Bannon, Donald Trump, and the Storming of the Presidency – Joshua Green”