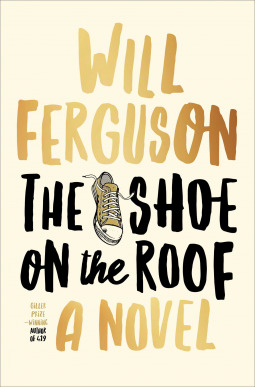 From the Giller Prize–winning novelist of 419 comes the startling, funny, and heartbreaking story of a psychological experiment gone wrong.

Ever since his girlfriend ended their relationship, Thomas Rosanoff’s life has been on a downward spiral. A gifted med student, he has spent his entire adulthood struggling to escape the legacy of his father, an esteemed psychiatrist who used him as a test subject when he was a boy. Thomas lived his entire young life as the “Boy in the Box,” watched by researchers behind two-way glass.

But now the tables have turned. Thomas is the researcher, and his subjects are three homeless men, all of whom claim to be messiahs—but no three people can be the one and only saviour of the world. Thomas is determined to “cure” the three men of their delusions, and in so doing save his career—and maybe even his love life. But when Thomas’s father intervenes in the experiment, events spin out of control, and Thomas must confront the voices he hears in the labyrinth of his own mind.

The Shoe on the Roof is an explosively imaginative tour de force, a novel that questions our definitions of sanity and madness, while exploring the magical reality that lies just beyond the world of scientific fact.

The Shoe on the Roof focuses heavily on psychological disorders and the brain itself. The main character, Thomas, is a grad student trying to obtain his PhD, but is unable to chose a thesis. His entire childhood was an experiment run by his father who is now a pioneer in the field. Unable to extricate himself from his father’s shadow, Thomas decides to cure his ex-girlfriend’s brother’s delusions that’s he’s Jesus Christ in order to win her back. Thus, begins an intriguing and funny story about science, religion, and how the two can occupy the same space.

“God only matters when he is silent. Why is that?”

If you’re interested in psychology and the brain, then this is the book for you. It dives deep into experiments and often references the Diagnostic and Statistical Manual of Mental Disorders (DSM). The experiments and terminology are explained in accessible terms, so you don’t have to be an expert to enjoy the psychological and science heavy portions of the novel.

Ferguson’s writing is amusing and funny. He has a way of incorporating comedy in otherwise dry passages that focus on the brain or psychological definitions. This makes reading those passages fun if you aren’t interested in the science between the brain and psychological disorders.

Two substantial themes throughout the novel are: using science to cure religious faith and the treatment of the mentally ill and homeless.
First, Thomas and his Father are men of science above all. They approach mental illness in terms of the brain and its structures, in other words they view it in quantifiable data. So, when Thomas is confronted with unexplained occurrences throughout the novel he’s forced to reconsider his long held beliefs, which affects the way he views science and faith.
Secondly, the treatment of the mentally ill and homeless is at the forefront of the novel. A hotly debated topic within the field is the use labels and Ferguson does a fantastic job of laying out both sides of the debate. Thomas’ father is used as the negative consequences of relying on labels through his arrogance. Watching Thomas struggle with his beliefs and the overbearing beliefs of his father in relation to the treatment of people in his experiment was fascinating and easily one of the best aspects of the novel.

The only portion of this novel I disliked, and the reason I rated it four stars instead of five, was the mystery component. If it were removed all together, the story would not be altered significantly making it feel out of place and irrelevant.

Overall, The Shoe on the Roof is a fantastic novel that dives deep into the world of psychiatry in relation to religious faith. Can faith be localized to a single area of the brain? Can faith be altered or removed by cognitive and behavioral change? Can faith and science occupy the same space? There are some of the thought provoking questions asked throughout the novel that will not leave you anytime soon.

** I received an ARC from the publisher in exchange for an honest review.

2 thoughts on “The Shoe on the Roof – Will Ferguson”