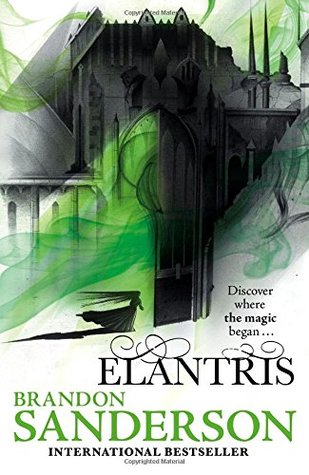 Elantris was the capital of Arelon: gigantic, beautiful, literally radiant, filled with benevolent beings who used their powerful magical abilities for the benefit of all. Yet each of these demigods was once an ordinary person until touched by the mysterious transforming power of the Shaod. Ten years ago, without warning, the magic failed. Elantrians became wizened, leper-like, powerless creatures, and Elantris itself dark, filthy, and crumbling.

Arelon’s new capital, Kae, crouches in the shadow of Elantris. Princess Sarene of Teod arrives for a marriage of state with Crown Prince Raoden, hoping — based on their correspondence — to also find love. She finds instead that Raoden has died and she is considered his widow. Both Teod and Arelon are under threat as the last remaining holdouts against the imperial ambitions of the ruthless religious fanatics of Fjordell. So Sarene decides to use her new status to counter the machinations of Hrathen, a Fjordell high priest who has come to Kae to convert Arelon and claim it for his emperor and his god.

But neither Sarene nor Hrathen suspect the truth about Prince Raoden. Stricken by the same curse that ruined Elantris, Raoden was secretly exiled by his father to the dark city. His struggle to help the wretches trapped there begins a series of events that will bring hope to Arelon, and perhaps reveal the secret of Elantris itself.

What is there to say about Brandon Sanderson? He’s a wizard with words. If you haven’t read anything by him, you’re doing yourself a disservice. Sanderson will sweep you up in a beautifully constructed fantasy world with compelling characters, a well-thought-out magic system, and a plot that will keep you glued to the pages. Elantris is no exception.

After reading the Mistborn series, I decided to read the entirety of Sanderson’s Cosmere, which led me to Elantris. Elantris is a very different novel compared to the Mistborn novels. Elantris is Sanderson’s debut novel, so his writing and characters aren’t are as tight as his later novels. However, that’s not to say it’s an awful novel. It’s far from it. I write this as a warning to adjust future expectations, so you can enjoy Elantris for its own majesty separate from Mistborn.

Elantris features a world where magic disappeared and the consequences its void has left. There are a lot of classic fantasy elements featured, however there are also a lot of interesting components that are unique.

Elantris is a slow moving novel that explodes at the end. If you’re not a fan of slow burning novels, than Elantris is not for you. Throughout a large portion of the novel, the reader is subjected to the slow moving progress of political moves traded back and forth in order to gain power. Despite this slow progress, the plot itself is truly fascinating. The reader follows three main characters: Raoden, the fallen prince, Sarene, the widow fighting for political capital, and, Hrathen, a priest with the mission of converting the city’s people for his emperor and god. These characters are intriguing and offer something different to the story.

The last few chapters of the novel are a large part of what makes Elantris so successful. The story explodes, secrets are revealed, and characters are redeemed while others are forfeited. It’s a crazy ending that kept me entranced.

Overall, Elantris is an excellent novel. It’s a slow pace for the majority of the book, but finishes in an explosion that will leave you exhilarated and grasping for more.